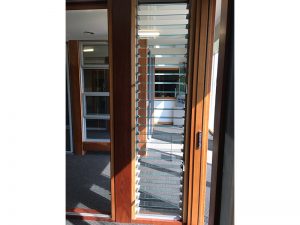 There are a lot of key components to our success as a company. The two that we’ll focus on in today’s post are the quality of our products and the level of reliable and responsive customer service that we offer each of our customers. They go hand-in-hand as we kick off a series educating you about your different options.  We believe that our products should be as unique as our customer’s needs and we’re hopeful that by sharing deep dives into the styles that we have available, you’ll be best set up for success. We’re kicking things off discussing louvre windows, also known as louver windows.

No, we’re not taking a trip to Paris to check out the museum, these are window shutters or blinds with horizontal slats. The slats play a strategic role in this design. They’re angled to allow in light and air, but not sunshine or rain. They’re easily adjustable to your preference or can also remain in place.

The Evolution of Louvre Windows

They’ve got a storied and extensive history, originally being designed in the Middle Ages. Back then, they were engineered as lanterns, made from wood and lived in the roof holes in large kitchens. As you can imagine, given wood stoves, the kitchens would become unbearably smoky and ventilation became paramount. The design was simple – barrels were consistently used.

Over time, the design evolved. Pottery became the primary material. The louvres become more creative, engineered to be shaped like faces where the smoke and steam could be seen through the “eyes” and the “mouth”. The modern louvres that you see today slowly became available and had slats that could be adjusted using a string. Today, louvres are built with several different materials, including aluminium, wood, glass and metal. Levers, pulleys and modern operators help open the slats.

Louvre windows shouldn’t be confused with jalousies, which are very similar. While louvres are fixed in position, jalousies have an adjustable mechanism that’s moveable and helps position the jalousies so that they’re evenly spaced and parallel to each other.

As we previously mentioned, we want our products to be perceived as uniquely as we see our customers. With louvre windows alone, we’ve seen dozens of applications in architecture historically, that you can draw inspiration from. Architects see them as a technical device versus a design element, but that doesn’t stop them contributing to some of the most beautiful buildings in the history of architecture. In fact, many modern systems of louvres improve the quality of lighting in buildings so much that they’ve become a necessity. Fixed and mirrored systems of louvres can even redirect light and limit glare, which is helpful if your home is facing a certain direction.

Ready to say “yes!” to a louvre system for your windows? Give the Valley Windows team a shout. You can connect with us by email, by phone or in person. We’d love to answer your questions and help get you started in creating a better view for your home.